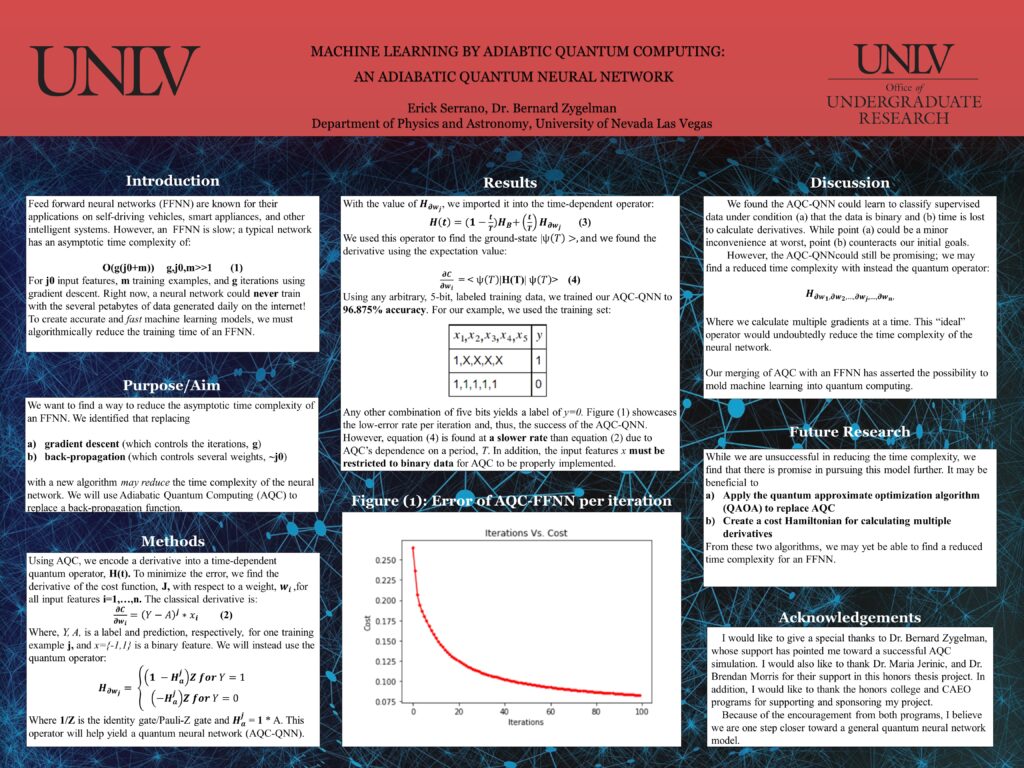 ABSTRACT
Neural Networks are commonly known for their applications across AI vehicles, smart appliances, robotics and more; however, they are limited by their non-polynomial time complexity. This report proposed to replace the feed-forward neural network (FFNN) with a quantum hybrid model and possibly reduce the complexity to linear time. We simulated Adiabatic Quantum Computing (AQC) for any two hamiltonians using python, and we showed that the accuracy scales with time. Then we use AQC to create and classically simulate a “trivial” AQC-QNN model; we state that it is trivial because the model replaces the back-propagation calculation for a perceptron. By testing against labeled 5-bit binary data, we found that the AQC-QNN model yielded 96.875% accuracy on the training set, and we also found that the model increased the time complexity of the neural network overall. While the AQC-QNN fails to reach the run-time goals, this sets up the foundation for an implementation on a quantum computer using the well-known quantum approximate optimization algorithm (QAOA). We expect to yield better run-times with a larger hamiltonian (which would minimize multiple weights, w1,…,wN, at a time) and with QAOA.

This research was funded by the Southern Nevada Northern Arizona (SNNA) Louis Stokes Alliance for Minority Participation (LSAMP), which is housed within UNLV’s Center for Academic Enrichment and Outreach and supported by a grant (HRD – 1712523) from the National Science Foundation (NSF). Any opinions, findings, and conclusions or recommendations expressed in this material are those of the author(s) and do not necessarily reflect the views of the NSF.