HNSE-P5-1. Behavioral Evaluation of a Novel Mouse Model With the Loss of GABAB Receptors 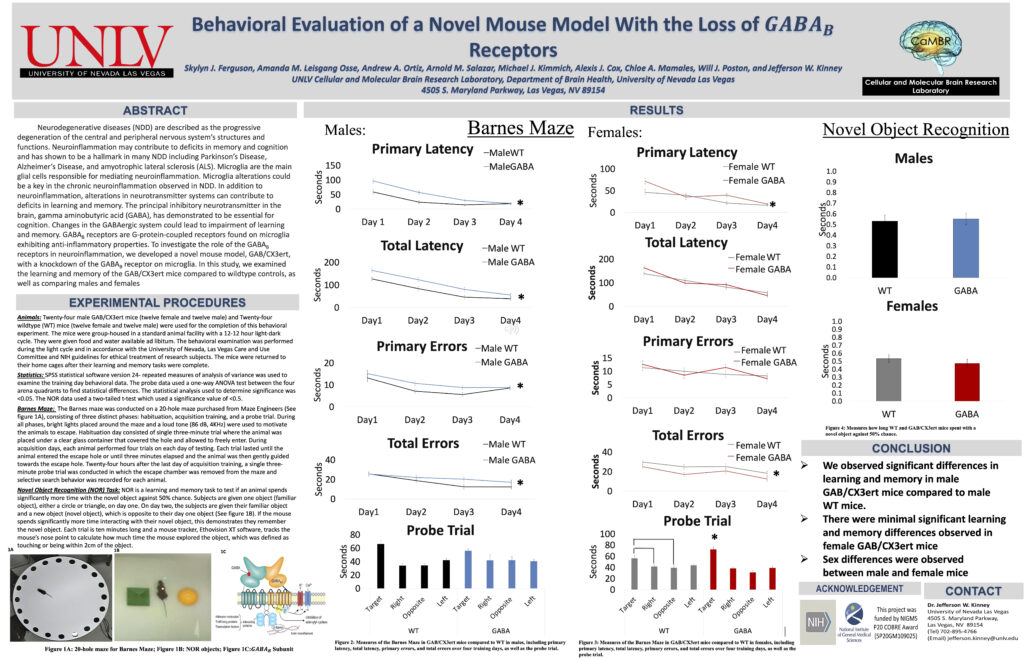 ABSTRACT
Neurodegenerative diseases (NDD) are described as the progressive degeneration of the central and peripheral nervous system’s structures and functions. Neuroinflammation may contribute to deficits in memory and cognition and has shown to be a hallmark in many NDD including: Parkinson’s Disease, Alzheimer’s Disease, and amyotrophic lateral sclerosis (ALS). Microglia are the main glial cells responsible for mediating neuroinflammation. Microglia alterations could be a key in the chronic neuroinflammation observed in NDD. In addition to neuroinflammation, alterations in neurotransmitter systems can contribute to deficits in learning and memory. The principal inhibitory neurotransmitter in the brain, gamma aminobutyric acid (GABA), has demonstrated to be essential for cognition. Changes in the GABAergic system could lead to impairment of learning and memory. GABAB receptors are G-protein-coupled receptors found on microglia exhibiting anti-inflammatory properties. To investigate the role of the GABAB receptors in neuroinflammation, we developed a novel mouse model, GAB/CX3ert, with a knockdown of the GABAB receptor on microglia. In this study, we examined the learning and memory of the GAB/CXert mice compared to wildtype controls, as well as comparing males and females.

One Reply to “HNSE-P5-1. Behavioral Evaluation of a Novel Mouse Model With the Loss of GABAB Receptors”