HNSE-P1-1. Comparison of Biochar Attained from Various Feedstocks for the Adsorption of Arsenic in Water 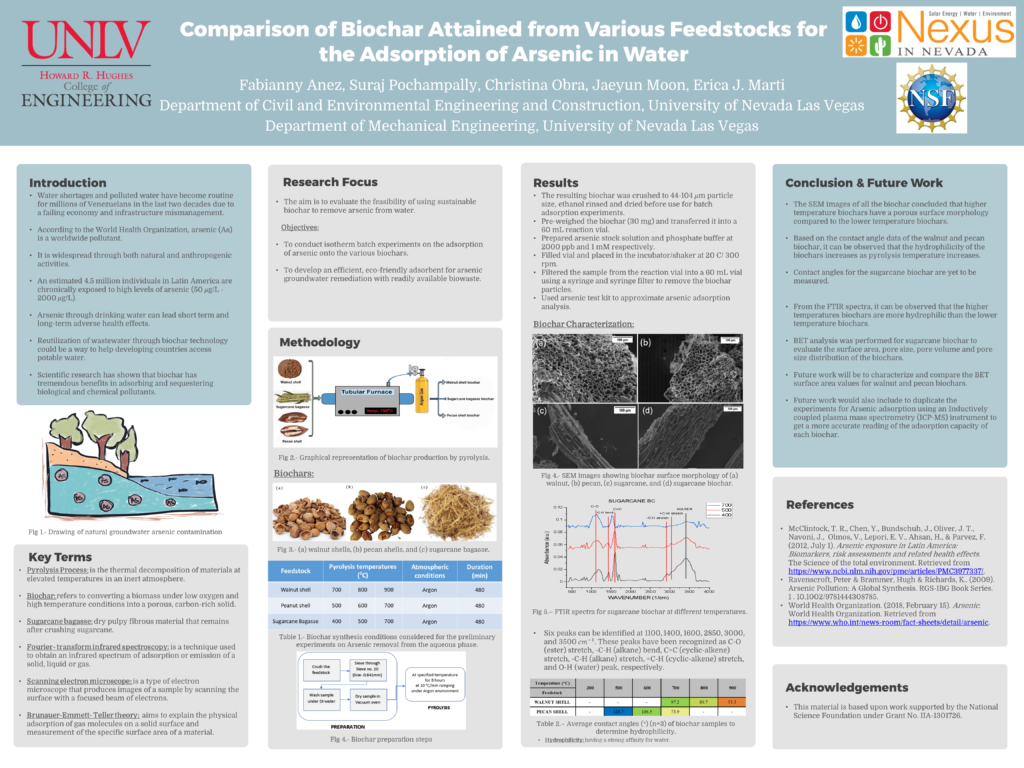 ABSTRACT
Water is a fundamental human right, yet in many developing countries, it is a luxury. Water shortages and polluted water have become routine for millions of Venezuelans in the last two decades due to a failing economy and infrastructure mismanagement. According to the World Health Organization, arsenic (As) is a worldwide pollutant. Though it occurs naturally, As is toxic and may cause chronic poisoning with prolonged exposure. An estimated 4.5 million individuals in Latin America are chronically exposed to high levels of As (>50 𝜇g/L), some up to 2000 𝜇g/L. Biochar, a carbon-based material, effectively adsorbs and sequesters pollutants. However, the decisive argument for further investigation of this sustainable adsorbent is its production from locally available and inexpensive materials. Furthermore, due to its large surface area, biochar soaks up pollutants from water. This research evaluates the feasibility of using sustainable biochar to remove As from water. In this study, we selected various feedstocks, specifically sugarcane bagasse, peanut, and walnut shells, which are readily available biowaste in Venezuela. Each feedstock was pyrolyzed for a specific time and temperature under an inert (Ar) atmosphere to produce biochars. First, biochars were characterized using various techniques such as FTIR analysis, BET theory, SEM, and others. Then, comparative, temperature-controlled adsorption batch experiments were conducted to estimate the adsorption capacities of each biochar. Future research will focus on taking the highest As adsorbent and preparing a water filtration system that a small community could use, providing them with improved access to clean water.

One Reply to “HNSE-P1-1. Comparison of Biochar Attained from Various Feedstocks for the Adsorption of Arsenic in Water”