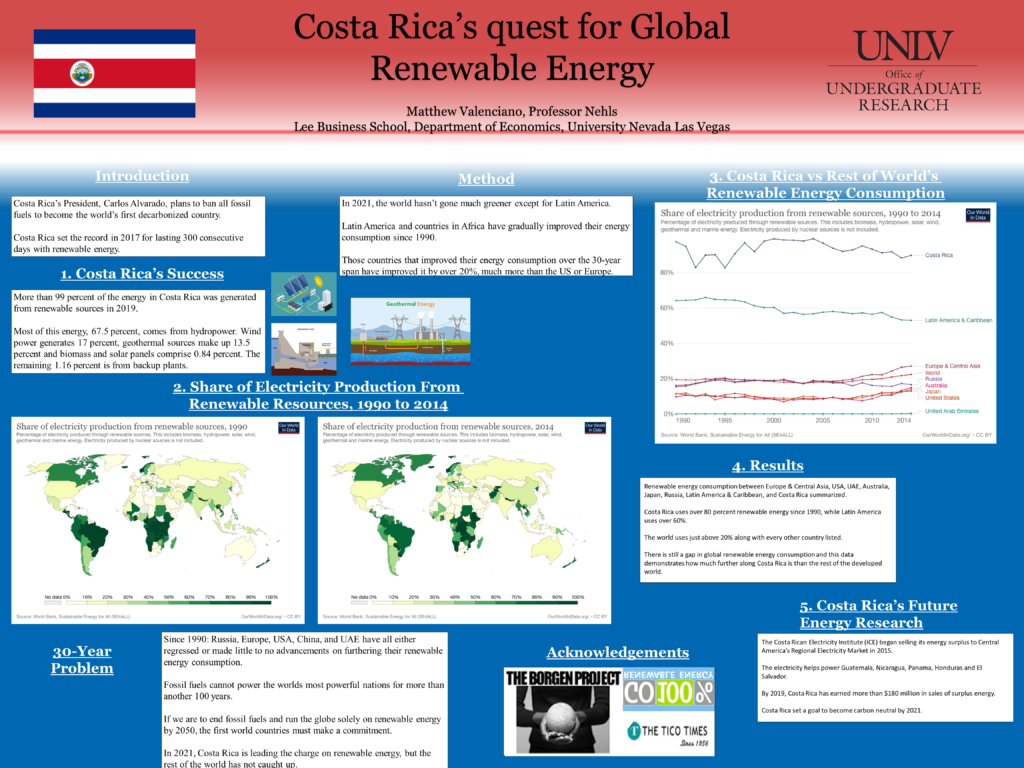 ABSTRACT
Global leaders understand that Earth cannot survive if we continue to use fossil fuels for energy use, yet renewables make up of just 26.2 percent of global electricity generation as of 2018. The United States and Europe have made contributions to global renewable energy use but haven’t made the leap that Latin American countries are willing to take. Primarily in Costa Rica, according to the country’s National Center for Energy Control, Costa Rica has been running on more than 98 percent renewable energy since 2014. Most of this energy, 67.5 percent, comes from hydropower. Additionally, wind power generates 17 percent, geothermal sources make up 13.5 percent and biomass and solar panels comprise 0.84 percent. Results show that Costa Rica has proven that their country can run solely on renewable energy for up to 300 days, as they proved this in 2017 where they set a world record. Due to Costa Rica’s plan to fully ban fossil fuels, deforestation has been successfully revered in the nation. Because of this, Costa Rica capitalized economically by enacting the Costa Rican Electricity Institute (ICE) and began selling its energy surplus to Central America’s Regional Electricity Market in 2015. The electricity helps power Guatemala, Nicaragua, Panama, Honduras, and El Salvador. By 2019, Costa Rica has earned more than $180 million in sales of surplus energy. We conclude that Costa Rica is leading the forefront in green energy while maximizing their profits to sell to poorer countries to solidify their status as a Latin American powerhouse.