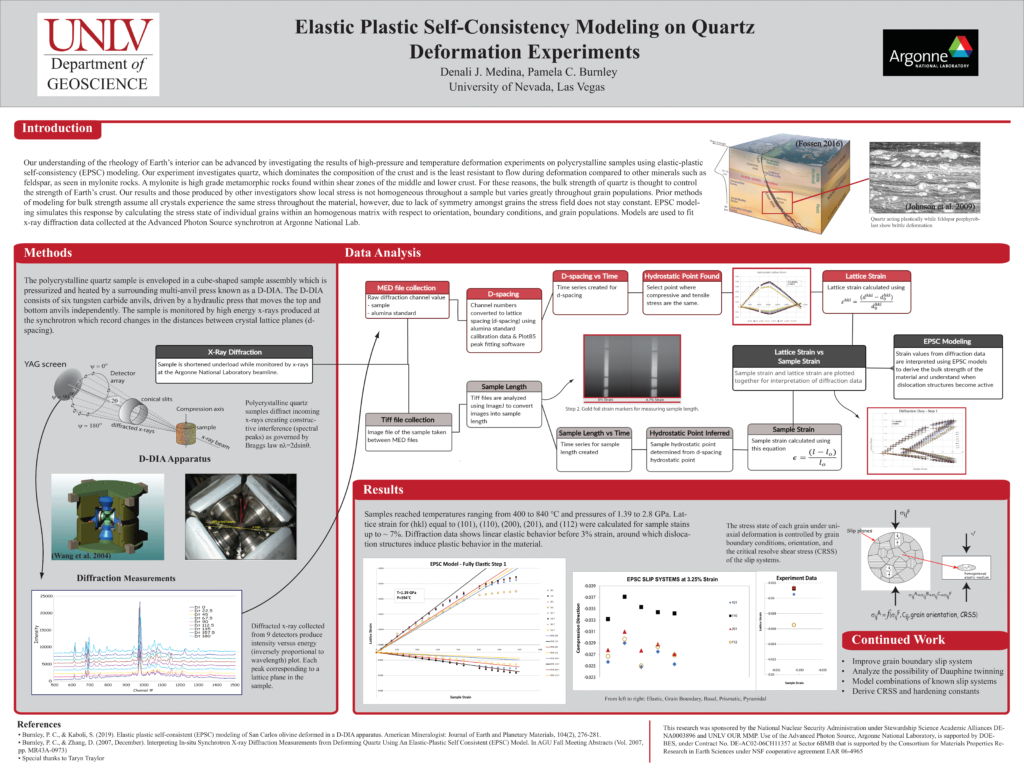 ABSTRACT
Our understanding of the rheology of Earth’s interior can be advanced by investigating the results of high-pressure deformation experiments on polycrystalline samples using elastic-plastic self-consistency (EPSC) modeling. Our experiment investigates quartz, which dominates Earth’s crustal composition and is least resistant to flow during deformation thus its bulk strength is thought to control the strength of the crust. During deformation experiments, a polycrystalline sample is enveloped in a cube-shaped sample assembly which is pressurized by a surrounding multi-anvil press known as a D-DIA apparatus. The D-DIA consists of six tungsten carbide anvils, driven by a hydraulic press that moves the top and bottom anvils independently. The sample is monitored by a high-powered x-ray beam at the Argonne National Lab. X-rays record changes in the distances between crystal lattice planes (d-spacing). Our results and those produced by other investigators show local stress is not homogeneous throughout a polycrystalline sample but varies greatly throughout grain populations. EPSC modeling simulates the anisotropic response of individual grains under load with respect to orientation, boundary conditions, and grain populations to best fit our diffraction data. Our samples reached temperatures ranging from 400 to 840 ℃ and pressures of 1.4 to 2.7 GPa. Lattice reflection spectra on the (101), (110), (200), (201), and (112) were gathered incrementally at sample stains nearing 7%. The lattice strain on these reflections is used along with the EPSC models to derive the bulk strength of the material and which slip systems are operating.