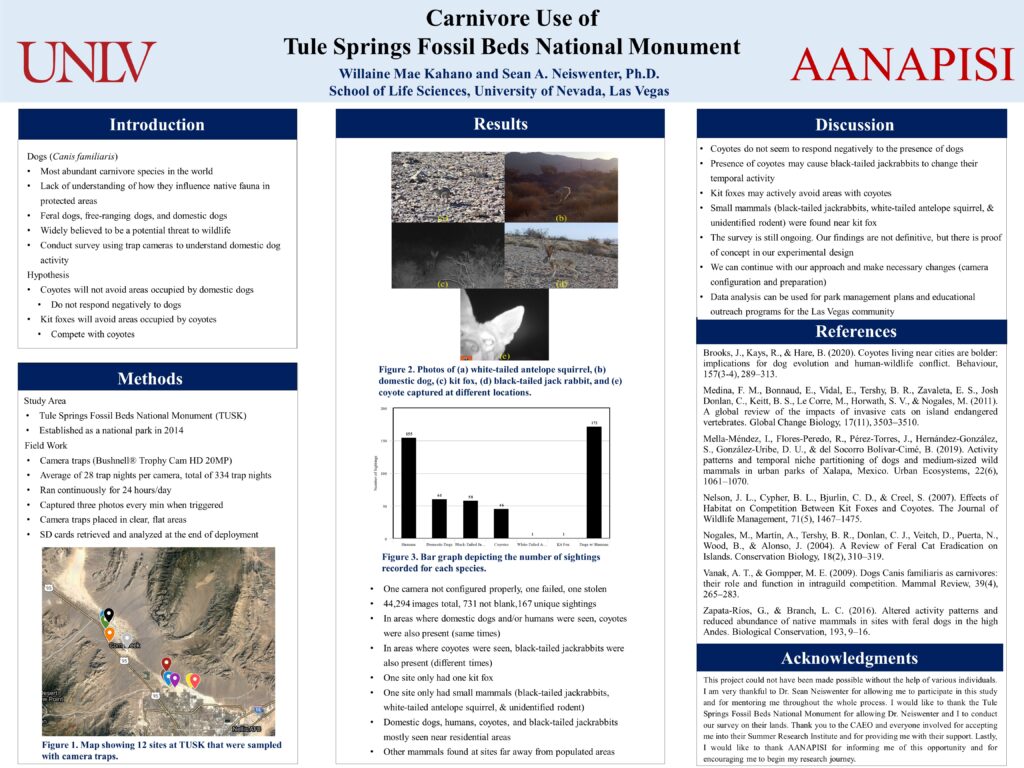 ABSTRACT
Domestic dogs (Canis familiaris) are one of the most well-known carnivorous species on the planet. Despite our familiarity with them, their effects on native fauna in protected areas is still unclear; however, many studies warn that dogs are a potential threat to wildlife. To understand the relationships between domestic dogs and native species, we conducted a preliminary carnivore survey at the Tule Springs Fossil Beds National Monument (TUSK) in Las Vegas, Nevada. Camera traps were placed in 14 different locations for an average of 28 trap nights. They were affixed to approximately 50 cm above the ground and were adjusted parallel to the ground. The cameras were programmed to run continuously for 24 hours/day and captured three photos every minute when triggered. 44,294 images were recorded across the cameras. The most dominant species recorded were humans (155 sightings), followed by domestic dogs (61 sightings), black-tailed jackrabbits (58 sightings), coyotes (46 sightings), and a few other desert species. Results reveal coyotes and jackrabbits were largely present in areas where both domestic dogs and/or humans were seen, and domestic dogs and coyotes were located at sites near residential areas. Our study indicates that coyotes do not respond negatively to the presence of domestic dogs. This is a preliminary survey, so more deployments are needed to form more definitive conclusions regarding the relationships between domestic dogs and native fauna.

This research was funded by UNLV’s Title III Part F Asian American and Native American Pacific Islander Serving Institution (AANAPISI) program, which is housed within UNLV’s Center for Academic Enrichment and Outreach and funded under grant (P382B160008) from the U.S. Department of Education.

One Reply to “HNSE-P4-3. Carnivore Use of Tule Springs Fossil Beds National Monument”