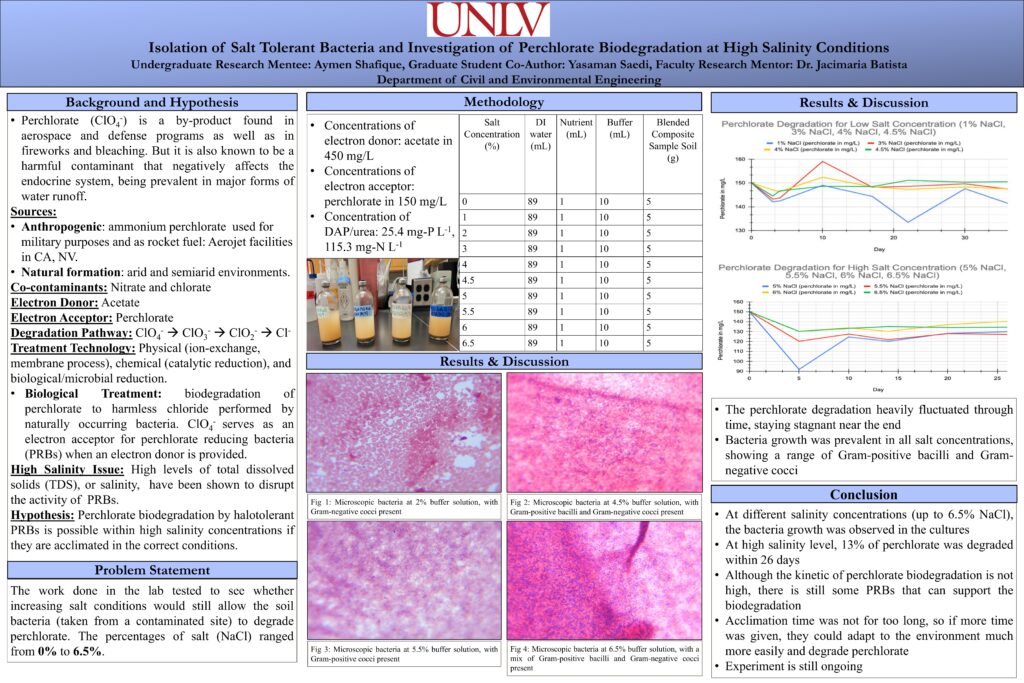 ABSTRACT
Perchlorate (ClO4-), known as a highly soluble oxidizer contaminant, has been detected in soil and groundwater throughout the United States for the last two decades. Biological reduction has been seen as a promising technology through which perchlorate reducing bacteria (PRB) occurring naturally in most environments utilize ClO4- as an electron acceptor. However, biological reduction of perchlorate is influenced by high salinity levels because the PRBs’ activity is hindered at salinities over 1%. The goal of this study is to investigate the impact of salinity (NaCl: 0-6.5%) on perchlorate biological reduction. Actual soil samples from the contaminated site containing PRBs were used and acclimated in broths with different salt concentrations and later the cultures were tested on their reduction abilities using perchlorate (150 mg/L) as an electron acceptor (450 mg/L) and acetate as an electron donor. Gram-staining results revealed that there has been consistent growth of salt tolerant bacteria observed at each salt concentration level (0-6.5%). The variety of bacteria are displayed with the diverse shapes present under the compound microscope, from Gram-positive bacilli to Gram-negative cocci. However, it is important to consider that the reduction kinetic is slow even as the perchlorate reduction has been observed at 6.5% NaCl concentration. This will be further studied as the experiment is still running to obtain more promising results regarding perchlorate reduction and salt tolerant bacteria isolation. The conclusion drawn so far is that there are salt tolerant bacteria in this soil which can degrade perchlorate at environments with high salt concentration.

One Reply to “HNSE-P1-5. Isolation of Salt Tolerant Bacteria and Investigation of Perchlorate Biodegradation at High Salinity Conditions”