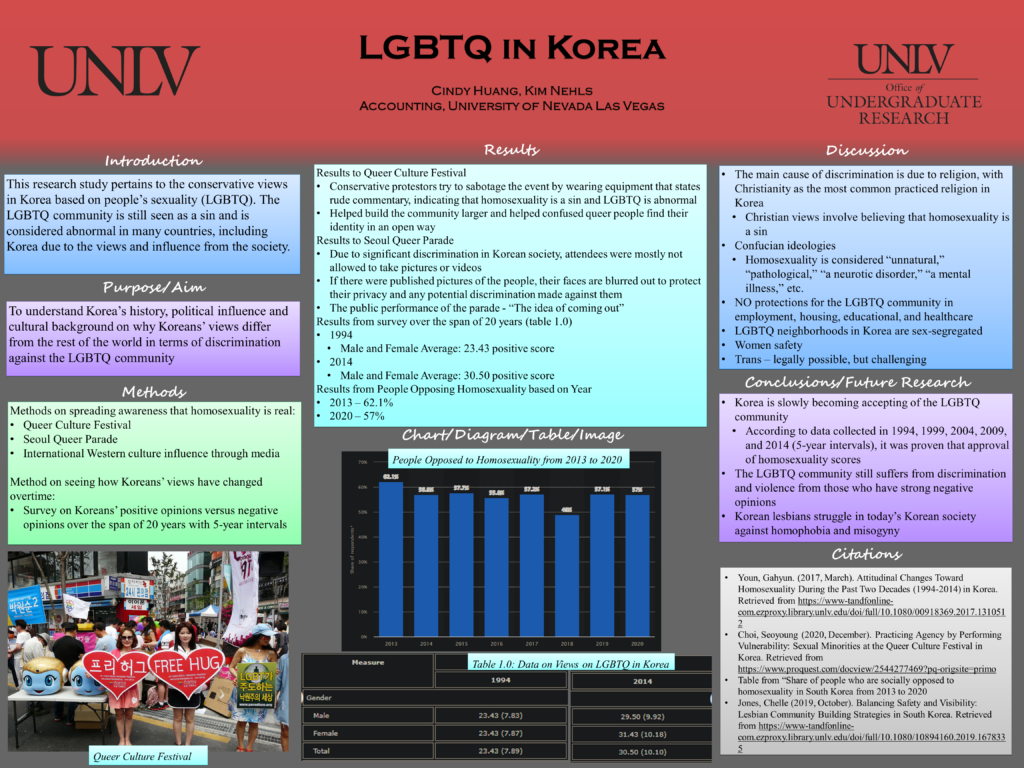 ABSTRACT
This research study pertains to the conservative views in Korea based on people’s sexuality (LGBTQ). The goal is to understand Korea’s history, political influence, and cultural background on why their views differ from the rest of the world in terms of discrimination against the LGBTQ community.
I analyzed the history of LGBTQ in Korea, including the Seoul Queer Parade. I also analyzed Korean politics that have a huge effect on people’s opinions and cultural views. Additionally, I looked for the reasoning behind their social and cultural views on why they have homophobia and why they feel the need to result in violence, inappropriate or rude commentary, and sexual harassment.
Statistically, we can see that out of 8,336 people in South Korea who have taken the survey, 57% are still opposed to the LGBTQ community. It has gradually decreased over the years since 2013 by around 5%. Lesbians feel the need to balance their safety and visibility as they are targeted by Anti-LGBTQ activists. There are contemporary social movements in South Korea that exist to prove that same-sex marriages are formed due to the same type of love that heterosexual people have.
I conclude that the LGBTQ community within Korea is generally in danger, hence why most LGBTQ identified people choose to hide their sexuality. The conservative views in Korea are still causing homosexuality to be seen as abnormal. However, Korea is slowly accepting the LGBTQ community overtime thanks to the international influence that proves that the community exists.

One Reply to “AHS-P3-6. LGBTQ Community in Korea”