AHS-P1-7. Most Impactful Years of the Yemeni Civil War 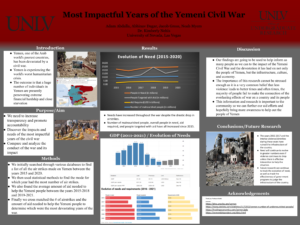 ABSTRACT
The Yemeni civil war that started in 2014 has ravaged the country and has led to a surge of negative changes in living conditions throughout the area. Many different events throughout the seven-year war have led to harsh conditions to still be prevalent throughout the country. It is hard to pinpoint what years of the war had the most effect on the society’s well-being. Using data from the Yemen Data Project, it was possible to find what years of the war were the most violent, and compare that data to the GDP of Yemeni people, the number of undernourished people in Yemen and the average dollar amount of aid the Yemeni people require per year. Results showed that despite the beginning years of the war being the most violent as the most airstrikes were being dropped, the conditions of Yemeni people continue to get exponentially worse despite a heavy drop in the amount of airstrike attacks against them. Lack of military clashes has not led to better conditions that deteriorate day by day. The vast intensity of the first few years of the war were so devastating that they created a ripple effect in which the infrastructure of the country was heavily damaged, leading to a situation that will need much assistance to repeal the effects of the most impactful years of the war.