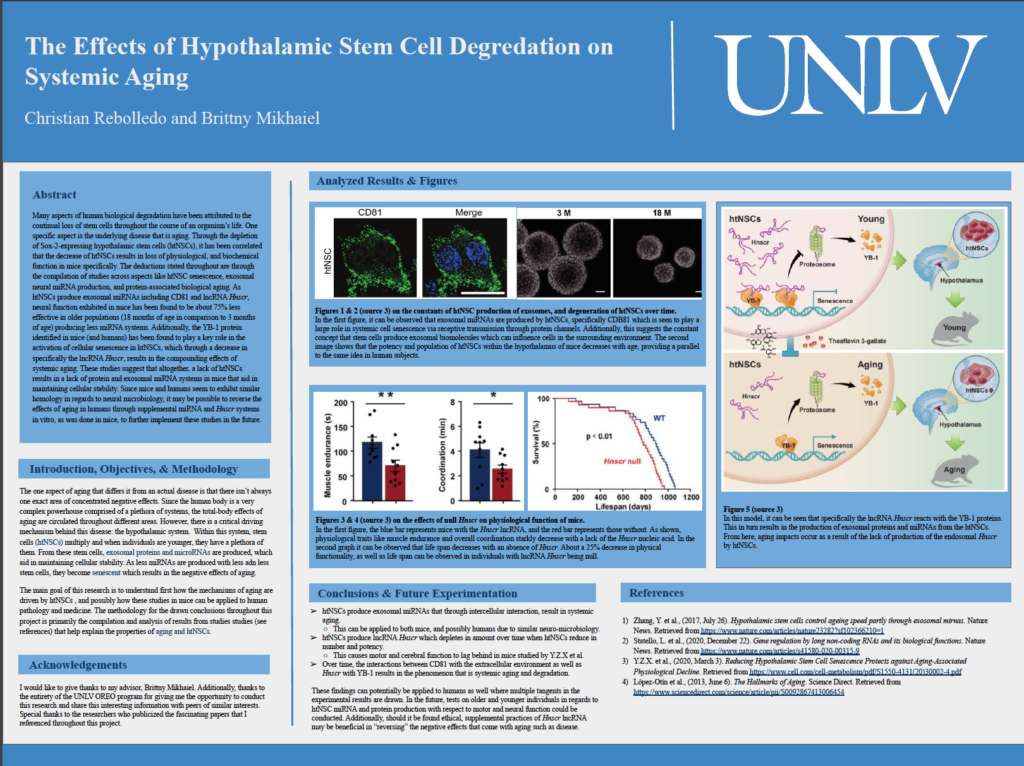 ABSTRACT
Many aspects of human biological degradation have been attributed to the continual loss of stem cells throughout the course of an organism’s life. One specific aspect is the underlying disease that is aging. Through the depletion of Sox-2-expressing hypothalamic stem cells (htNSCs), it has been correlated that the decrease of htNSCs results in loss of physiological, and biochemical function in mice specifically. The deductions stated throughout are through the compilation of studies across aspects like htNSC senescence, exosomal neural miRNA production, and protein-associated biological aging. As htNSCs produce exosomal miRNAs including CD81 and lncRNA Hnscr, neural function exhibited in mice has been found to be about 75% less effective in older populations (18 months of age in comparison to 3 months of age) producing fewer miRNA systems. Additionally, the YB-1 protein identified in mice (and humans) has been found to play a key role in the activation of cellular senescence in htNSCs, which through a decrease in specifically the lncRNA Hnscr, results in the compounding effects of systemic aging. These studies suggest that all together, a lack of htNSCs results in a lack of protein and exosomal miRNA systems in mice that aid in maintaining cellular stability. Since mice and humans seem to exhibit similar homology in regards to neural microbiology, it may be possible to reverse the effects of aging in humans through supplemental miRNA and Hnscr systems in vitro, as was done in mice, to further implement these studies in the future.

3 Replies to “OREO-2. The Effects of Hypothalamic Stem Cell Degradation on Systemic Aging”