HNSE-P4-1. The Effects of Male Olfactory Signal in Drosophila Grimshawi 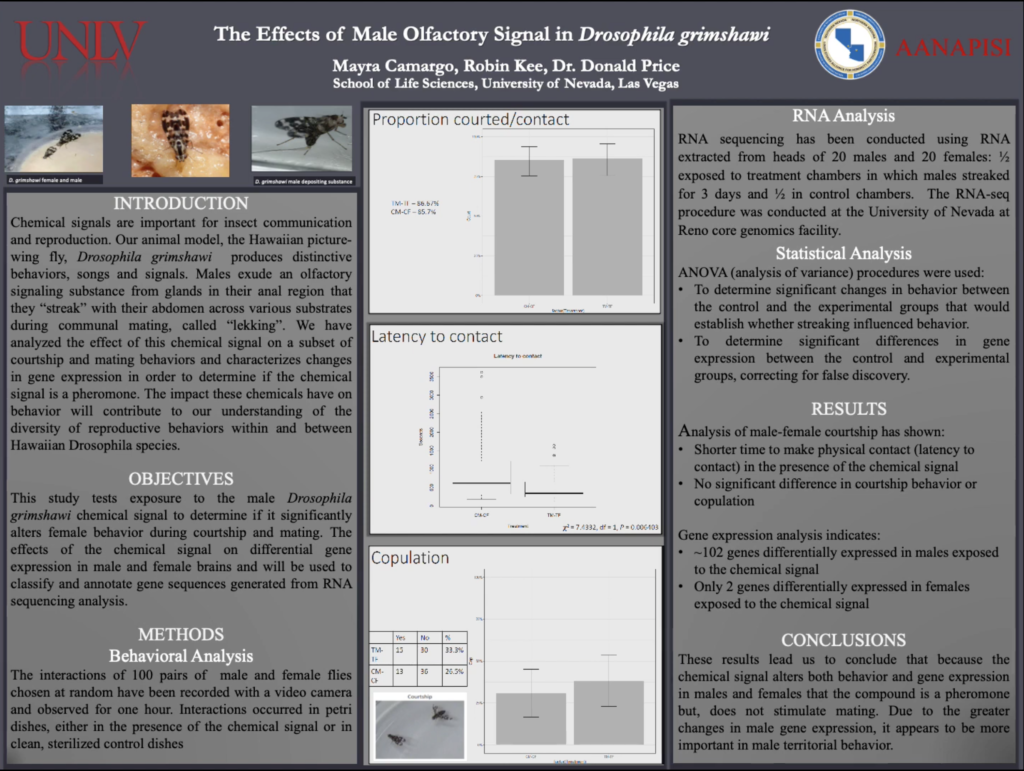 ABSTRACT
Drosophila grimshawi are found to do Lek behavior and are consuming more time being sexually active at lek sites. It is believed that this action would result in increased mating success. Males discharge these chemical materials to build communal space for females to attend the sites and perform courtship. Mating achievement varied considerably among males and was connected with the time males spent engaged in sexual activity at lek sites (Droney, 1992). Drosophila grimshawi is used to further distinguish the reproductive responses within its species. The chemical signal would determine if it affects the female behavior for mating. The gene expression in male and female brains would be used for RNA sequencing analysis.

The flies are split into two groups, in which one group is the control. For one group, the male is free to streak the base of the dish for about 3 days. Afterward, two flies, one male, and one female are picked on a petri dish and recorded for about an hour. Viewers are expected to watch the recorded videos, track the behaviors that are visible within these flies, and note the data down on an excel sheet. The results prove the chemical signal alters both behavior and gene expression in both genders. However, it only proves that chemical signaling is a pheromone; it does not stimulate mating. There are larger changes in male genes, so it is more useful in male territorial response.

This research was funded by the Southern Nevada Northern Arizona (SNNA) Louis Stokes Alliance for Minority Participation (LSAMP), which is housed within UNLV’s Center for Academic Enrichment and Outreach and supported by a grant (HRD – 1712523) from the National Science Foundation (NSF). Any opinions, findings, and conclusions or recommendations expressed in this material are those of the author(s) and do not necessarily reflect the views of the NSF.

2 Replies to “HNSE-P4-1. The Effects of Male Olfactory Signal in Drosophila Grimshawi”